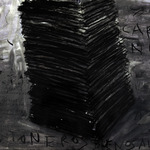 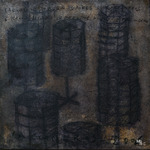 Words and signs are central in the works of Sandro Mele (Melendugno, Lecce, 1970): the words are often truncated, overlapped or partially canceled by a sign or a drawing, and this process seems to indicate a suspension, an afterthought (much like a correction of a child’s handwriting), a disapproval, a wrinkling of the forehead. It appears as a reference to the inadequacy of words in the face of certain political and social issues that Mele’s works tackle. Precisely here, the free and incisive nature of drawn signs come in.

The idea behind Cartenoros, which came to him whilst travelling to Argentina in 2006 to implement the project on the Fasinpat ceramic factory ("Fabrica sin patrones"), an example of corporate self-management among the most significant of the country. Mele had been following the labor movement since 2000, after attending a demonstration staged by local workers, until he decided to return to Argentina in 2006. On this occasion he noticed the reality of the “cartoneros”. The economic crisis of 2001 caused the foreclosure of thousands of industrial plants and shops in Argentina, with a subsequent dramatic increase of 3,500 improvised workers for the collection of waste paper and cardboard around the cities. These workers seamlessly blended in with the blind frenzy of the metropolis, rummaging through the trash or dragging stacks of cartons. The project was supposed to include a large installation made of cardboard, stacked from and compressed between the floor to the ceiling, along with some paintings that the artist had painted during his stay in Argentina’s capital as well as an extensive photographic documentation, often carried out in secret among the city's neighborhoods. 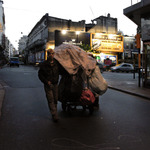 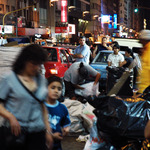 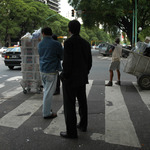 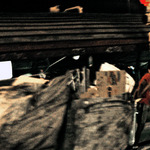 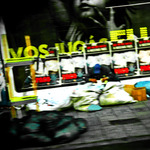 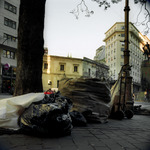