The work of G. Küng concludes this itinerary, to which I have tried to give an order following some associations that outlined themselves over the past few months. In introducing her project, the image I chose as a guide to the exhibition - a tribute to both the artists who opened their archives to share and donate their project as well as the city of Parma - becomes even more clear. While working on this exhibition, I found this postcard of the Infantry School of Parma at the flea market: the light infantry and all the elements depicted recall the efforts, the planning, the study and the knowledge, but also the struggle, and underlying strength in research and in the work. 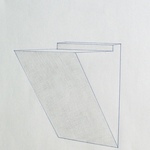 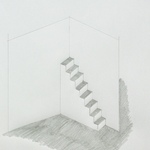 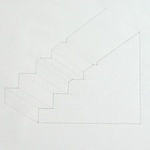 Stairs by G. Küng (New York 1082) was conceived for Frieze London: it would point to the competition for limited places, to the curators’ power and also to the context, which is not neutral, and can sometimes be oppressive as in the case of an art fair. The project would consist of really oversized photographic prints on the theme of "stairs.” Photographs of models in board or plaster, variations on the stair form. They would be difficult stairs, treacherous ones or impossible to climb stairs: their shape would mean that if you tried to climb them, they would topple over, or a step would have a broken apart, or they would get taller and taller as you climbed. Enlarging the photos hugely, the images would be too tall for the pseudo-walls of the art fair, and the prints would stick out above the walls. The project is thus a reference to the ambition and competitiveness, the attention grabbing motivation behind many projects for these art fairs.

The artist, caring very little about making a name for herself, uses the abbreviated 'G. Küng', which is meant to encapsulate a stance of resistance.