From an attempt to rewrite the history to the idea to redraw a nation’s flag: Lilium Bosniacum by Ibro Hasanović (Ljubovija, Yugoslavia,1981) was was thought to be realized in order to see if the Bosnian constitution - based upon the Dayton Peace Agreement of 1995 - could be translated into “natural law”. This peace agreement, which also serves as the Bosnian constitution, is a complex structure making any kind of progress in Bosnia seem impossible.

At the core of the project was the idea to create a set of rules, ​to​ genetically modify the Bosnian Lily - in order for it to comply with the complex structure of the Dayton Peace Agreement - and finally register this “hybrid lily” to the EU database of plant varieties. The lily is native to Bosnia and Herzegovina and is also a popular symbol that has been used in Bosnia since the Middle Ages, going out of use with the invasion of the Ottomans. In 1992, when Bosnia and Herzegovina gained independence from Yugoslavia, lilies were brought back onto the Bosnian flag, and in 1998 were again replaced with the current flag. Having always been used as the nation’s identification, as a signal in warfare or the conquest of a territory, the flag is a communication tool strictly connected with a symbolic gesture (lift the flag, plant the flag). 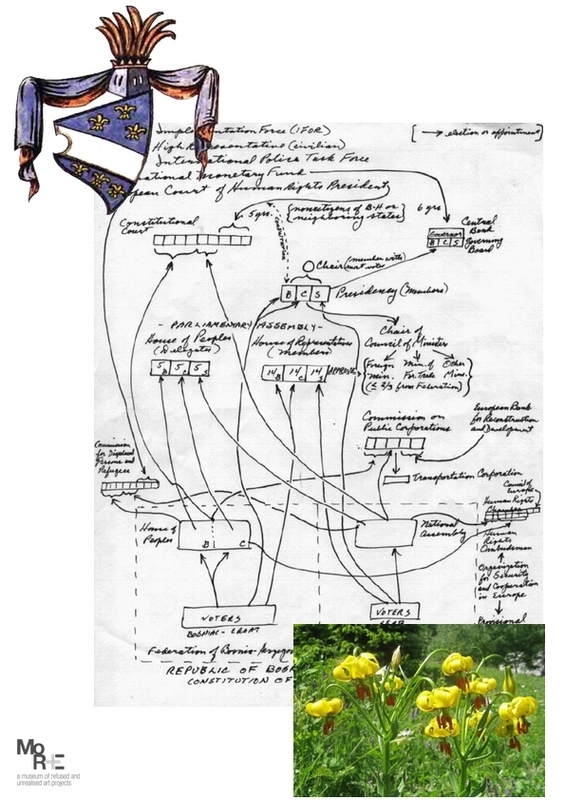