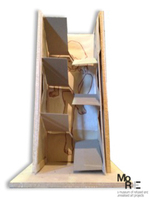 Site-specific project: fresco on the walls of a large scale of a nineteenth century building, recently renovated to become the site of a well-known italian bank. Initially, Berruti was contacted directly by the Director of the Bank in order to realize the site specific project. Only during the vernissage of the new bank headquarter, Berruti discovered that the project had been given to another artist. Childhood is once again the main concept of this work, with the almost stylized figure of a girl that is at the same time minimal and strongly expressive.
Read more.

Failure to meet the commissioner's demands