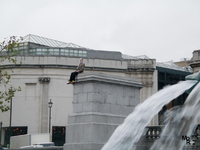 Two proposals presented as part of the great public art project connected to the Fourth Plinth in Trafalgar Square, London and never realized. The "Fourth Plinth" was in fact originally built in the second half of the nineteenth century, as a base to host the equestrian statue of William IV, but has remained empty for over 150 years and the debate about its possible use has continued till 1999, when the first three temporary commissions were assigned to contemporary artists for site-specific projects. Following the success of this first initiative it was decided to form a committee of experts, which comprises Jeremy Deller himself, to follow the subsequent calls, invitations and selection of projects: this committee has officially and unanimously established the final destination use of the fourth plinth as a support for specifically commissioned installations of contemporary art.In particular, Jeremy Deller in the two projects donated to MoRE, both developed in 2008, proposes an anti-monumental and deeply political vision, working - in his own words - more from the perspective of a citizen than from the one of an artist, closely linked to the contemporary situation of the country involved in the Iraqi war. A first proposal was the life-size statue of David Kelly, the British scientist found death after his supposed suicide, as a result of statements made to the media about his doubts about a real presence of the weapons of mass destruction held by the Iraqi government, and the subsequent Parliament investigation.
The second proposal, called The Spoils of War, proposed to expose the carcass of a car destroyed by a bomb in Iraq, bringing a trace of the war in what has been for centuries the heart of the British Empire and still is universally recognized as a place with a strong monumental character.
Read more.

Failure to meet the commissioner's demands, Project which wasn’t selected in a prize or competition