Born in 1974 in Guatemala, where she still lives and works, Regina José Galindo, performer politically and socially active, made her first international appearance in 2001 at the Venice Biennale curated by Harald Szeemann, and she receives the Golden Lion to a young artist in 2005. Her works can be found in the collections of international museums (San Paolo Museum of Contemporary Art, Castello di Rivoli, Blanton Museum of Texas, Miami Art Museum…). Her work has been included in several groups and personal exhibitions, in Italy and abroad, such as Urgent Issues at Bucharest MNAC, The Body of Others, at the Modern Art Oxford and so on. She took part to the Kiss Kiss Bang Bang exhibition at the Visual Arts Museum in Bilbao, the second edition of the Biennale in Moscow, Turbulence, the third Biennal of Auckland in New Zealand, Otras Contemporareidades, Biennal of Valencia, Viva la muerte and the Kunsthalle of Wien.  Her performances, in which she uses her own body to experience sufferances and pain, aim at denouncing the dramatic conditions of the Guatemalan women and population, but face also issues such as violence and  social injustice from a universal point of view.
http://www.reginajosegalindo.com 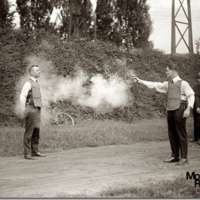 Invited to take part to the second edition of the performance festival curated by Adriana Rispoli and Eugenio Viola, Corpus. Art in action, 7-26 June 2010 at MADRE Museum in Naples, Galindo focused on the social problems that affects the city. As a…
View item