Originally from Belluno, the artist began to make himself known at the beginning of the new millennium with wall paintings made mostly in social centres of Bologna, as well as in some video art events organised by the Academy of Fine Arts in Bologna, where he received his formal training. Very important was his collaboration with the street artist Blu, with whom he has cooperated since his debut on the scene on numerous murals, almost always of enormous dimensions. Ericailcane's works are characterised by a scientific precision with which the artist outlines disturbing animals with human movements, placed in alienating contexts, sometimes loaded with social or ecological significance. The same iconography also recurs in his refined drawings, artist's books, videos and installations, also made on public commission: from the traditional Vecchione set up in 2009 by the City of Bologna, to the façade decoration in 2013 of the Museum of Contemporary Art of Bogota, Colombia. Over the years his fame has grown and, overcoming the lack of interest for the art market, he began to work occasionally for some galleries such as the Biagiotti Progetto Arte in Florence, the D406 in Modena, the Squadro in Bologna or the famous Pictures On The Walls, declination of the London gallery Lazarides. However, more than the exhibitions, in which he participates infrequently, it’s above all his murals that have made him known in every corner of the world. In addition to Italy, he has been active in Great Britain, United States, Spain, Mexico, Ecuador, Colombia, Guatemala, Morocco, Palestine, France and Germany.
(main source: Wikipedia). 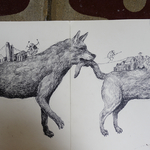 The idea of the wall painting by Ericailcane was born in 2014 and meant to fit into the second edition of FRONTIER - The Line of Style, an open and evolving platform, based on two complementary operational phases: one dedicated to the artistic…
View item