Pablo Echaurren was born in Rome in 1951. He started to paint at the age of 18, inspired by Gianfranco Baruchello, and was soon discovered by the critic and gallerist Arturo Schwarz, who promoted his work in Italy and abroad. His work was initially characterized by a certain minimalism, with a conceptual approach and a rejection of pictorial conventions, offering an alternative to the idea of the work of art as fetish. Since then, he has always been looking for new languages and new forms of expression, never resting on his laurels.

Not just a painter, he has engaged in a wide range of activities, such as illustrations, writing, as well as the creation of “metacomics” that investigate the possible relationship between avant-garde and popular art, seeking that necessary and fertile short-circuit between “high” and “low,” culture and frivolity. His work has been presented in numerous museums. Among the most recent exhibitions: Contropittura(La Galleria Nazionale d’Arte Moderna di Roma 2015-2016) and Du champ magnétique(Scala Contarini del Bovolo, Venezia 2017), Pablo Echaurren(Mart, Rovereto 2019). 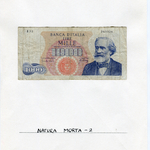 The unrealised project Artisti coraggiosi proposed by Pablo Echaurren in 1974 to Galleria La Margherita in Rome, involved the participation of the artist who, seating at a table inside the bare spaces of the gallery, equipped with papers, scissors…
View item