The art practice of Tomislav Gotovac was marked by a wide media diversity: he was a filmmaker and a photographer, he made collages, objects and installations, he changed his own appearance, he staged actions and performances in public spaces and made provocative appearances in mass media.
Gotovac was born in 1937 in Sombor. His father Ivan was from the Dalmatian highlands, while mother Elizabeta (Beška) came from a Sombor family of German origin. In the summer of 1941, after the beginning of World War II and the breakdown of the Kingdom of Yugoslavia, Gotovac’s family moved to Zagreb, into the flat in Krajiška 29. Gotovac’s childhood and adolescence were marked by a strong interest in film. After finishing high school, Gotovac began to study architecture in Zagreb, but he abandoned the study after a year. In 1954, he became an active member of Kinoklub Zagreb, a gathering place of cinephiles and amateur filmmakers. He did his first works in photography (Heads1960, 1960.; Showing Elle, Breathing the Air, 1962; Posing, Suitcase, The Trio, Hands, 1964). He made his first film in 1962 (Death), and in 1963 he made a manifest documentary-experimental film The Forenoon of a Faun. Gotovac filmed his famous trilogy, consisting of Straight Line(Stevens-Duke), Blue Rider(Godard-Art) and Circle(Jutkevič-Count) in Belgrade in 1964. He took part in all editions of the Genre Film Festival (GEFF), held in Zagreb from 1963 to 1970, and received several awards. During 1964 and 1965, he worked intensively on a series of collages inspired by the work of Kurt Schwitters. In 1967, Gotovac enrolled in film directing at the Academy of Theatre, Film, Radio and Television in Belgrade. The event that marked his work in numerous ways was his participation in Lazar Stojanović’s film Plastic Jesus(1971), where Gotovac was both the lead actor and the assistant director. Gotovac finished his studies in 1976. In the same year, he had his first exhibition in SKC Gallery in Belgrade, where he gave an overview of his fifteen-year-long art practice (photographs, collages, films, documentations of public actions). After returning to Zagreb, Gotovac’s presence on the art scene began to increase and he took part in numerous exhibitions in the country and abroad. From 1979 onwards, he did numerous performances in public space, in Zagreb, Beograd, Osijek, Rijeka and Ljubljana, using public media as an integral part of his art practice. In the beginning, those were student and youth magazines such as “Student”, “Vidici”, “Studentski list”, “Polet”, but later he began to make appearances in top-selling magazines and TV. These actions and the deliberate manipulation of his own character were directly related to his questioning of his own identity within the confines of patriarchal society and his stance on eliminating the boundaries between art and everyday life. At the end of the 1980s, he began to re-decorate his parents’ flat in Krajiška 29, creating an installation out of his own works and various objects. In 2004, he officially changed his name to Antonio Lauer, taking his Christian name and his mother’s maiden name. He worked under this name in the last period of his artistic production, from 2005 to the end of 2009.  Tomislav Gotovac won numerous film recognitions. After 1976, he was showing his works at different exhibitions in the country and abroad. His work presented Croatia at the 54th Venice Biennial (2011), and it was included in Documenta 14 in Athens and Kassel (2017). Retrospective exhibition Tomislav Gotovac: Crisis Anticipator was held at the Museum of Modern and Contemporary Art in Rijeka in 2017 and later travel to House of Art in Usti nad Labem and City art Gallery in Ljubljana. His works are in collections of Museum of Contemporary Art in Zagreb, Museum of Contemporary in Belgrade, Museum of Modern and Contemporary Art in Rijeka, Modern Gallery in Ljubljana, Kontakt – Art Collection of Erste Bank Group in Vienna, Centre Pompidou in Paris, Museum of Modern Art in New York, Art Institute of Chicago and several private collections. 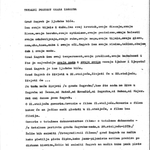 Total Portrait of the City of Zagreb was a project for a documentary film on the city of Zagreb. The only document which has survived is a sheet of paper typed and signed by Tomislav Gotovac himself. He states his intention to observe the city as…
View item