Born in Florence in 1967, Flavio Favelli lives and works in Savigno (Bologna). Having graduated with a major in Oriental History from University of Bologna, he participates in Link Project (1995-2001) attending the TAM residency in Pietrarubbia, under the supervision of Arnaldo Pomodoro (1995) and the Advanced Course in Visual Arts at Fondazione Antonio Ratti, hosted by Allan Kaprow (1997). Favelli has exhibited both in private and public spaces, in Italy and abroad, including MACRO (2010), MAXXI (2012 and 2015), the American Academy (2010), Fondazione Volume! (2006), Sales Gallery in Rome (2008, 2010, 2013), Museo del 900 (2012) Museo della Permanente (2002) Francesca Minini Gallery in Milan (2014), MAMBO (2011), Centro Arti Visive Pescheria in Pesaro (2010), Museo Marino Marini in Florence (2009), Francesco Pantaleone Gallery (2008), Museo RISO (2011), A Project Space in Palermo (2012), Museo di Villa Croce in Genua (2005), Centro per l'Arte Pecci in Prato (2005), Palazzo delle Papesse in Siena (2002), Fondazione Sandretto Re Rabaudengo (2007), Maze Gallery in Turin (2001 and 2003), Maison Rouge Fondation Antoine de Galbert in Paris (2007), Projectspace 176 (2005), IIC in London (2003) and in ICC in Los Angeles (2004). Among his main collective exhibitions, Favelli has also shown his works at Peggy Guggenheim Collection in Venice (2011), at GAMEC in Bergamo (2011 and 2012), at Castello di Rivoli (2012) and GAM (2006) in Turin, at Havana XI Biennial (2012), at IBID Project Gallery (2011), at the festival No Soul For Sale at Tate Modern in London (2010), at Fondazione Pomodoro (2010) and Raffaella Cortese Gallery (2009) in Milan, at MADRE (2010) and at PAN Museum (2006) in Naples, at MOCA in Shanghai (2010), at Villa delle Rose (2001), at GAM (2005) in Bologna, at Musèe d'Art Moderne in Saint-Etienne (2005), at Museion in Bolzano (2003) and at Elgiz Museum (2008) in Istanbul. Favelli has participated at Carrara XIII Biennale di Scultura (2008), at Roma XV Quadriennale at Palazzo delle Esposizioni (2008), at the exhibition Italics at Venice's Palazzo Grassi (2008), and at MCA in Chicago (2009). He has designed and realized two working bar-installation, at MAMbo and at MARCA in Catanzaro, and two permanent public spaces: Vestibolo at ANAS headquarters in Venice's Palazzetto Foscari, and Sala d'Attesa atthe Pantheon in Bologna, inside the Certosa Monumental Cemetery, where laical funeral services are held. In 2009 he was the selected artist for Acrobazie #5, a Unicredit Group project at Fatebenefratelli Center of San Colombano in Lambro (Milan). In 2010 he was in residence at the American Academy in Rome as an Italian Fellow for the Arts. He took part in two editions of the Venice Biennale, the 50th ("Clandestini", curated by F. Bonami) and the 55th ("Vice versa", Italian Pavillion, curated by B. Pietromarchi). In 2014 he was in residence at the Italian Embassy in Istanbul, invited by AlbumArte association; he also had a solo exhibion at Maison Particuliere in Bruxelles. In 2015 he has been selected for a study residency at NARS Foundation in New York. He has attended seminars and conferences, among many other public and private institutions, at the Academy of Arts of Venice, at Brera in Milan, at Politecnico in Turin, at the University of Bolzano, at the University of Bologna and at Quadriennale in Rome. His works are featured both in private and public collections, such as Galleria d’Arte Moderna and Fondazione Sandretto Re Rebaudengo in Turin, MAMBO, Bologna Fiere and Fondazione Furla in Bologna, La Maison Rouge and Fondation Antoine De Galbert a Parigi, La Gaia Collection in Cuneo, Civiche Raccolte d’Arte and Fiera Milano in Milan, MACRO and Nomas Foundation in Rome, Museo Arte Contemporanea Villa Croce in Genua, Zabludowicz Collection in London, Elgiz Collection in Istanbul and Unicredit Banca Collection. In 2008 his installation La terza Camera was acquired by MAXXI Museum in Rome. 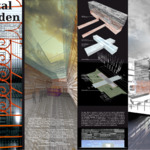 The project was created for an international competition promoted in 2009 by SEA, the company which manages Milan airport system. As stated in the announcement, the competition concerns the creation of “a new architectural project for the realization… 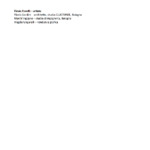 Flavio Favelli conceives this project, together with the architect Flavio Gardini and the engineer Matteo Grilli, for a competition curated by Bartolomeo Pietromarchi.The artist envisiones the creation of an outline of the old nuclear power plant in…
View all 2 items