Mangelos, pseudonym of Dimitrije Bašičević (1921 - 1987), was a Croatian artist, curator and art historian. Born in Šid, Serbia, he studied history and philosophy at the University of Vienna (between 1942 and 1944) and later in Zagreb (between 1945 and 1949) and earned a doctorate from the University of Philosophy in Zagreb (1957), focusing his thesis on the work of the artist Sava Šumanović. In 1952 he founded the Peasant Art Gallery, currently Croatian Museum of Naive Art, while simultaneously serving as assistant and curator at the Yugoslav Academy of Arts and Sciences. He was among the founders of the group Gorgona, active in Zagreb between 1959 and 1966.
Parallel to his activities as a critic and curator, he proposed researches - defined by the artist himself as a "No-Art" - focused on the contrast between writing and painting, developing a series of posters dedicated to topics such as "functional thinking", "energy", "instinct" and “memory". In the essay dedicated to this specific artistic production, Stipančić says: “Many of them, regardless of the scope of the subject, included his notion of there being two civilization - a “handmade civilization” and a “mechanical” one. The latter, he believed, is based on “functional thought” and is, therefore, in opposition to the old “handmade civilization. In order to express his theses on the “death of art”, Mangelos engaged in a dialogue with numerous philosophers and theoreticians, from Hegel to W. Benjamin”.
Mangelos was among the founders of the group Gorgona, active in Zagreb between 1959 and 1966. The group also included Josip Vaništa, Marijan Jevšovar, Julije Knifer, the sculptor Ivan Kozaric, critics Radoslav Putar, Matko Meštrović and architect Miljenko Horvat. Every one of the artists of Gorgona maintained, developed and enjoyed full creative autonomy. Gorgona has supported various unconventional forms of artistic activity, mainly divided into three sections: the exhibitions at the Studio G (1961-1963, Schira Salon, Zagreb, Croatia), the publication of the anti-magazine "Gorgona" (1961-1966 each edition was a work of art in itself), and the creation of concepts, projects and various forms of artistic communication. 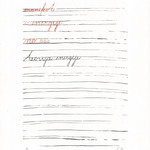